THROUGH MY EYES - FIRST YEARS 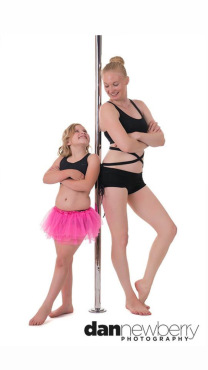 When I was 2 weeks old my dad was doing the night feed as my mum had had a caesarean section so she needed to rest and at the time they had a water bed.

My dad fell asleep with me still on the bed and as he turned over he accidentally kicked me off the bed. They woken up to a massive thug followed by a screaming baby face down on the floor. To this day my dad says that he rolled over and a wave from their water bed must have nudged me haha but the reason I wanted to tell you that is because my parents always say that it explains a lot about who I am today, because of that happening to me so young being ‘dropped on my head’ it’s now a running joke to why I’ve always been unafraid of falling.

Having a 6/7 year old doing pole fitness with no fear full of excitement not waiting for a crash mat or a spotter to help me made me a bit of a risk assessment in waiting but I was so lucky because Ruth (my instructor) was always behind me and never gave me a chance to fall. I did and still do look up to her so much.

Ruth was the only one who taught me and supported apart from my family and back then kids who do pole fitness was quite unheard of in the UK and at first not many people knew I was learning.

I was having private lessons with Ruth, only 30 minutes after school once a week but I loved it so much. Ruth and I even did a little routine to ‘black heart’ and looking back I was so little but you could see how much I loved it.

Towards the end of 2012 my mum and Ruth were talking a lot about something called UKPPC and at the time I had no idea that it would become such an prominent part of every year to follow.

Ruth had entered the Instructor category of the competition and got through to the final.

It was a very early morning and we all had t-shirts with ‘keep calm, keep spinning, go Ruth’ on them to support Ruth at UKPPC.

We arrived in Telford and the atmosphere was buzzing and there were stalls selling all kinds of pole stuff, it was honestly like a dream.

I had heard that Bendy Kate was going to be either performing or competing, I can’t remember which to be honest but there was a chance I was going to meet her as my mum was doing Ruth’s hair so she was back stage with all of the other competitors and I got to go there with her.

There were so many pole dancers, I was in total awe of them all. Some had brightly coloured hair, massive shoes, makeup and the most sparkly costumes I had ever seen.

My eyes took in so much that day and although I was so young I can actually remember key moments from the first time at UKPPC.

I met Bendy Kate, Daniel Rosen, Sarah Scott, Sally-Ann Giles, Jess Leanne Norris and I got to have my photo taken with them and they would say that I was so tiny and I would say that I can do some pole. They all thought I was very cute with my supporter t-shirt on for Ruth.

As we walked into the room where the stage was for Ruth’s rehearsal I was speechless. It was a raised stage in the middle of the room with a sea of round tables but it was empty as the audience hadn’t arrived yet.

We decided to go and have a look around the stalls, it was something that I had never seen before. I spoke to everyone on the stalls, I think it was a novelty that I was there so young and I would tell everyone I was going to be a famous pole dancer like Bendy and ask if they had any clothes that would fit me.

The smallest was a size small and it was too big for my tiny body but everyone was so nice to me.

This was the first time I met Sarah from Wink and that was a moment that would pave the way for my future in pole.

Sarah said that one day there might be a children’s range but at the moment there just wasn’t the call for it as not many kids did pole lessons.

I met Pete and Sue from Pole Amore and all of these people were strangers at first and now they are friends who have watched me grow up in the pole world.

The show started and I could hear the audience cheering. Mum was back stage with Ruth and as it was her turn to compete she was so nervous, this was a feeling I would get to know very well.

I still remember bits about her performance, how little she looked up on the stage but when she started performing she looked like she was 10ft tall and how many people were in the audience.

If I am honest I don’t think I actually saw all of the show as I was very much a kid who would fall asleep at the table which I am sure I did as it was such a busy day for me.

Since then we have gone to UKPPC every year it has been on and I even got to perform but I will tell you more about that another time.

This was my introduction to the real pole world away from the studio and I was hooked, I absolutely loved it and couldn’t wait for more shows.

That Christmas I asked for a pole for my room, not your average 7 year old request but my wish was granted and that would become my only way of training for a while.

On the 2nd of January 2013 there was a fire at the centre where my mums salon was and where my studio was and this meant that there was no more pole for me for a while.

My mums business had to be relocated along with Ruth’s businesses and this was a terrible time as my Dad’s work also went into liquidation.

My mum started working from home and my dad managed to get another job quite quickly but my training stopped for a while.

Ruth started teaching her classes at a venue but I wasn’t training with her anymore as it just didn’t work in another place and our old studio wasn’t going to be fixed but luckily I had my pole in my room.

I would bug my mum asking for her to help me train but she wasn’t a pole dancer, she had no idea at all.

Ruth came over a few times to show me some moves to try but there wasn’t a lot of space in my room even though I was so small.

I would make up little routines that looking back on them make me cringe now haha.

No other studios in the area would teach me no matter how much my mum would try.

Through the summer of 2013 my mum heard of a talent show in our town and she asked me if I wanted to audition for it, I jumped at the chance!

My Mum and I made up a little routine and I auditioned in front of 3 people and they were astonished and confused at how an 8 year old would get into pole dancing and what I could do on the pole.

We chose a song called ‘To Where You Are’ by G4 as it was an operatic piece and it was my Nan’s song for my Grandad who died.

I got through to the final and I was dressed like a little angel, I took a photo of my Grandad on stage with me so he could be there too and I ended up coming 2nd.

For me and my mum the fact that they recognised what I did and supported me to put me on the stage was like winning because I didn’t know at the time just what a nightmare my mum had had to deal with because her daughter was learning pole fitness.

I started having lessons again with Ruth at the studio where I train now, I have so much to be thankful to Ruth for because when nobody else in our area would teach me she did. I will always be thankful to her for that because she saw the dream in my eyes and just got it.

I went to UKPPC again that year and people remembered me but this time they had a playground where I could have a go and if I’m honest show off haha and then in the January my mum spoke to Kay Penney and asked if at some point I could perform at one of her shows.

Kay asked if I wanted to perform at the preliminaries of the World Pole Dance Championships at Taylor’s retreat. I made my own routine to the song ‘How Long Will I Love You’ and I took my teddy with me.

That was my first performance for the pole world, everyone was so supportive and I got to meet Bendy Kate again.

I look back now and I can barely watch as my toes were terrible and I couldn’t barely do anything but I was so happy and I didn’t know it but I was making history as I was the first child to perform there.

Kay Penney gave me that, took a chance and again I am so thankful and she has been so supportive to me as I have grown through the years.

That was the first few years of my pole life and there is so much more yet to come.

Thank you for reading. 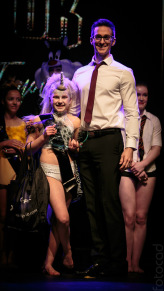